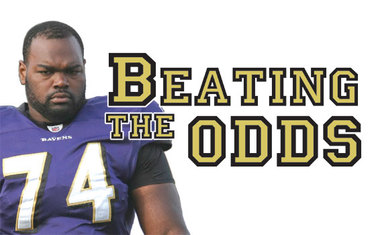 I Beat the Odds is an autobiography about Michael Oher. Michael Jerome Williams, Jr. was born on May 28th, 1986, in Memphis, Tennessee. He was one of 12 kids. Neither of his parents supported him growing up. His father was in and out of prison and his mother was addicted to crack cocaine. Michael was always going to the foster home. He came from an extremely poor community. While Michael was in high school, his father was murdered. Michael went to 11 different schools in 9 years.

When Michael was 17, he was adopted by Sean and Leigh Ann Tuohy. In Michael's junior year, he began to succeed in football. Michael was offered many Division-1 scholarships. Michael Oher ended up going to University of Mississippi. Michael ended up playing in the NFL. In 2006 Michael Lewis published a book called The Blind Side which featured Michael Oher's story.
Michael Oher published his autobiography to let others know about his story. He wants to clear up the facts and get rid of the rumors. Michael also wants to give hope to other kids who might be in their situation.

The book was a New York Times bestseller.